It’s cold. Really cold. The kind of cold that’s so arresting it feels like Jack Frost himself is luring every bit of warmth you have inside you to leave your body. And it’s certainly the cold that breaks the regional record low — a 45-year-old one, in fact.

You can’t bend your fingers, and you can’t stop your eyes from watering, and you certainly can’t work in these conditions when the temperature is in the teens on this early January morning in Burgaw.

But that doesn’t stop farmers from dropping off their produce at the Feast Down East distribution center, a nonprofit that helps farmers with limited resources get their food in local markets. They can’t let it stop them. These farmers’ livelihoods depend just as much on what they pull out of the ground as yours depends on the food that winds up on your plate.

There’s something planted deep within the American psyche that paints the most pleasant of pictures about farming, and it’s easy to see why. You get to buy a plot of wide, open land and call it your own. You do what you want with it, and there’s nothing that will talk back to you but the cabbages and the peas and the dirt.

“It sounds nice, but it’s a 7-days-a-week job,” says Jim Lofts, who’s dropping off several boxes of produce spared right before the blustery turn in the weather. He owns a 64-acre farm in nearby Chinquapin with his wife, Rosemary.

“If you have chickens, or turkeys, or hogs, you’re tied to that place every day, all year, never with a day off,” he adds.

So why keep farming if it’s so difficult?

“We enjoy the simplicity, I guess. I don’t know why we keep farming,” says Rosemary with a warm laugh that makes you feel like you’ve known her for years. “I enjoy just working with the soil and the dirt.”

You might be inclined to think that as two retirees, the Lofts would prefer to sink their feet in the sand at a nearby beach.

“I would rather run around on my tractor than run around on the beach,” Jim says. “I don’t see any value of oceanfront. If it doesn’t have dirt on it, I don’t need it.” 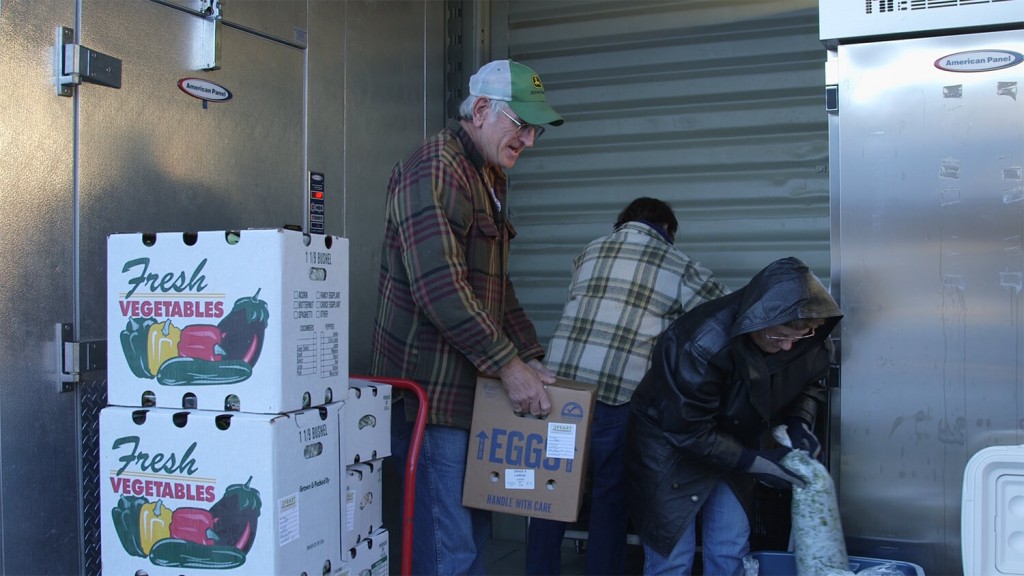 Though the income they make off of it is only supplemental, farming is at the root of who the Lofts are as people. No matter how hard it can be out in the field, farming gives them meaning. A purpose.

But in today’s world when big agriculture companies are swallowing up family farms, being a small-scale farmer is harder than ever. Immediacy trumps freshness, convenience outweighs flavor, and the family farmer sometimes simply doesn’t have the resources to keep up.

Farmers need a person who can fight for them, a friend. They’ll find both in Molly Rousey.

Rousey, Feast Down East’s processing and distribution coordinator, is a self-described “horrible bragger” when it comes to letting others know about the triumphs of the farmers she works with.

“We’re in rural Pender County. You have got to celebrate your successes,” she says.

In the grand scheme of what Feast Down East does, Rousey is responsible for moving product, constantly meeting with grocery stores and restaurants and encouraging them to sell food grown locally by the farmers she works with.

It can be tough, especially when you hear the word “no.”

“I just keep pushing and hoping I’ll find some angle,” Rousey says. “And I also keep hoping that that person has more virtue than they’re showing me at that point and that it’ll reveal itself another day.”

A job like this requires a balance of realism and optimism, both of which Rousey possesses. She doesn’t hold her tongue, but when she speaks, her sentences end with smiles almost as frequently as they do with periods.

It’s important that Feast Down East gets farmers’ names out into the community, whether that’s through brochures, social media, or canvassing, in order to leave the farmers to their farming.

“Time is valuable when you’re farming,” Rosemary says. “You need your daylight hours to farm, and you can’t do much of that at night.”

Time is, indeed, a valuable thing. As big farms become even bigger and more corporate, small-scale farms are at risk, especially as fewer young people take up the family profession. It hurts farmers now, but it’ll hurt consumers, too, if more don’t choose local, Jim and Rosemary say.

Gone will be the days when food is as fresh and tasty as can be, reaped from the earth minutes down the road. It’ll become harder to support the local economy, protect the environment, and maintain biodiversity of the land.

“We’ll be gone soon,” Rosemary says of herself and Jim. “We don’t have that many more years to live, so we’re just providing for the next generation and helping them along because we know they are the future — we are not. That’s what keeps getting me up every morning.”

As a family farmer, it’s only natural to care about the people who eat your food, especially when they live next door. What a privilege it is to know your neighbors, the growers of your meal.

Perhaps that’s the reason why so many of the highway billboards around here tell you to thank your farmer three times a day. Perhaps we ought to pay more attention.

“You’re paying for the children’s clothes of the family who grew the food, and you’re also paying to keep the future of that farm alive. People need to think bigger than the head of lettuce they bought,” Rousey says. “They need to think about that family.”