Meet the sweet potato in your beer

Sweet potatoes subtly accent the beer in your glass at Fullsteam Brewery, but there’s a lot more to the vegetable than you might think upon first sip.

In North Carolina, sweet potatoes grow in the same dirt where we plant our own roots. As the nation’s top producer of sweet potatoes, we take pride in the loamy soil beneath our feet, and we can point to more than 50,000 acres of sweet potatoes we grow every year as evidence of who we are as people:

Bobby Ham, a farmer and entrepreneur in Greene County, is all of the above, though he would be the last person to ever boast about himself.

To get an all-natural sweet potato from plow to pint takes some time.

Ham plants old rootlets from the previous year’s crop in early March. Once they begin to sprout, Ham and his team snap off the sprout, called slips. Once the slips form roots after being put in water, Ham plants them sometime between late April to July. Each plant yields about half a dozen sweet potatoes.

Once the crop is washed and cured, it’s passed along to Yamco, a grower-owned processing plant that is also based in Greene County, which makes vegetable and fruit purees. There, the sweet potatoes are inspected, peeled, diced, blanched, and pureed before they make their debut on tap at Fullsteam or in other products like baby food, muffins, and vodka.

Not only does it take time to produce a quality sweet potato product, it also requires a lot of effort and intentionality. But Bill Heafy, Yamco’s general manager, says it’s worth it.

Now that’s something we can sip on here in the Old North State. 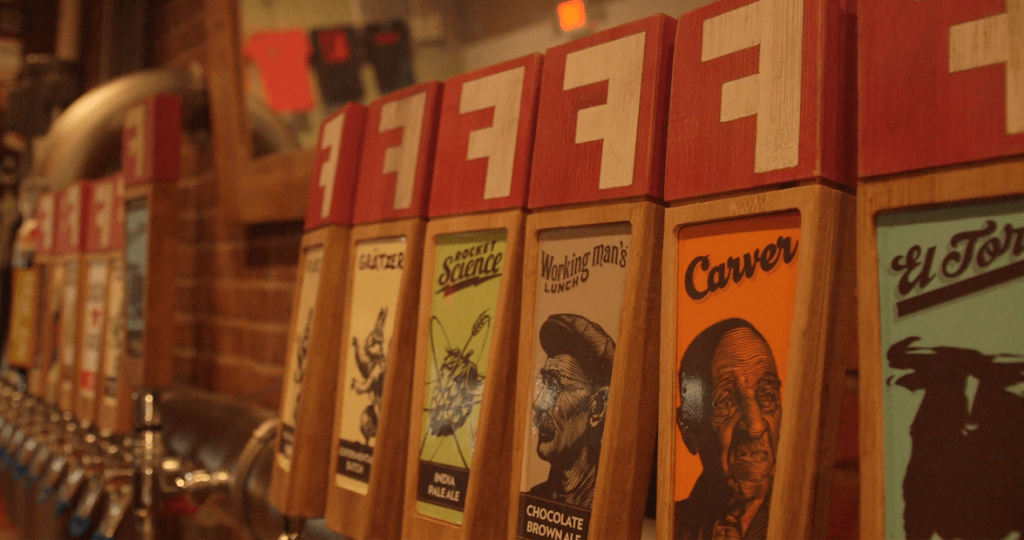 Learn what’s on tap at Fullsteam

Carver
While the Carver is a beer inspired by sweet potatoes, don’t expect an overwhelming flavor like the one you’d find in a Thanksgiving casserole dish. Instead, sweet potatoes offer subtle flavor notes, which are earthy and balance out hints of sweet caramel in the malt base. Watch the video above to learn more.

Working Man’s Lunch
Born out of the concept of RC Cola and Moon Pies as a flavor combination, Working Man’s Lunch features slight notes of graham cracker, which are created by the malt, and chocolate. When available, the cocoa nibs used in the beer are sourced from the bean-to-bar-minded Escazú Artisan Chocolates, which is based in Raleigh. Chocolate beers can occasionally be cloying, but this one isn’t. “Whereas some of those beers would be like a dessert, Working Man’s Lunch is a little more like a snack,” says head brewer Brian Mandeville.

El Toro
Don’t act so surprised to learn that grits are in your pint glass. This is the South, after all, and this staple side dish is reinterpreted in El Toro, a cream ale. “It’s exactly the kind of grits you’d prepare on your stovetop,” Mandville says. Yellow corn grits, which are sourced from Lakeside Mills in Spindale, make the beer surprisingly crisp and mildly sweet. Fullsteam sources its malt from Riverbend Malt House in Asheville.

Fullsteam Common Lager
Those who enjoy red or amber ales will likely enjoy the Common Lager. The slow cooling process used to brew this style of beer creates a duality of crispness, which is a common characteristic of lagers, and fruitiness, which is a staple of ales. Mandeville says hops are very much present in a common lager but not to the same extent of a bitter IPA.

Rocket Science
Those who have been scorned once by a particularly bitter or dry IPA should give this beer style a second try with Fullsteam’s Rocket Science IPA. Unlike many of its modern counterparts, Rocket Science is brewed using traditional methods, creating a citrusy profile with a stronger malt presence. “Being that kind of IPA, it helps bridge the gap between maybe your more intense IPA drinkers and those going for really intensely hoppy beers, and folks who haven’t had that kind of thing before,” Mandeville says.

Hogwash
Pork isn’t the only thing being smoked around these parts. Hogwash, which was inspired by North Carolina barbecue, is a porter that uses grains smoked on-site at Fullsteam. Though some might initially find the concept of smoked beer to be off-putting, “you get this really dark malt presence that complements the smoke well,” Mandeville says.

Beasley’s Honey White
Consider us a fan of anything that’s supposed to be paired with fried chicken. Brewed in collaboration with Beasley’s Chicken + Honey in Raleigh, this beer features sweet honey harvested in North Carolina, and zesty peppercorns. For those with budding, adventurous palates, it’s a great brew to try.

Cack-a-lacky
Fullsteam’s best-selling beer, Cack-a-lacky, is a cross between an American Pale Ale and ginger beer. Ginger, which is sourced from Layton’s Produce in Raleigh, makes this beer incredibly refreshing and versatile for food pairing.

Paycheck
This clean and refreshing pilsner encapsulates Durham in more ways than one. Aside from being brewed in Durham, it highlights the city’s water. Though the water isn’t actually the best for brewing most kinds of beer, it works well in the easy-to-drink and simple Paycheck.